I never dreamed of visiting Thailand. Whenever I read news on Thailand, it was all about massive floods and streets inundated with waters. All this changed when I came across beautiful islands and beaches of Krabi in the Groupon newsletter. As I read more about Krabi, to my surprise it was not affected by recent floods. Without further ado, I accepted the groupon offer and booked  my stay for 4 days, 3 nights at Lanta Resort in Koh Lanta, Krabi. A day before my departure, I exchanged Singapore dollars to Thai Baht from the Fountain Exchange counter, Suntec city. The exchange rate was  24.6 baht/SGD. 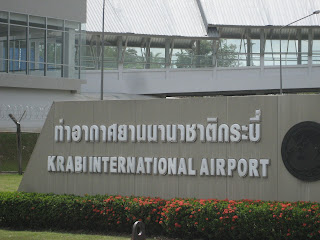 On the 28th Jan, 2012, we boarded tiger airways at 11:30 am from Changi Airport, Singapore. The flight ticket cost 358 SGD for me and my wife. We reached Krabi International airport at around 12:15 noon local time. The journey time was 1 hour and 20 minutes.

For Indian nationalities, there’s visa on arrival facility at Krabi airport. I paid 2000 baht as visa fee for both of us. It was fast and efficient. I was impressed by the courtesy and politeness of the immigration officers at the Krabi airport. After immigration, we went downstairs to book public mini van. We opted for public van as it was cheaper and it cost 390 baht/person. We boarded the van at around 12:45 noon. Since I carried USD also, I exchanged USD to Thai baht at the rate of 30.81 baht/USD before leaving the airport. Apparently, it was the same rate in Singapore.

Had we arrived earlier, we could have booked ferry to Koh Lanta from the airport. There is only one passenger ferry running every day at 10:30 am to Koh Lanta. Nevertheless, the journey via van was fine. It was air conditioned. First we were taken to the Krabi town. We reached a travel agency at 1:30 pm and then at 2 pm we boarded another van to Koh Lanta. On the way, the driver picked few other tourists and headed off to Koh Lanta. The road to koh lanta was smooth journey, we got to see the plantations, rivers and fields which reminded us of Kerala in India. After driving about an hour, we crossed the first island via ferry. It took 15 minutes to cross. Few kilometers ahead, we crossed the Lanta Noi island by ferry. This time it took only 5 minutes to cross. After few kilometers, we reached our destination at around 5:30 pm. The resort was beautiful. We stayed in room B104. Personally, I think, it’s one of the best resorts in Lanta.

After dropping our bags in the room, we took tuktuk, similar to autorickshaws in India, to Saladan. It cost 100 baht for 2 persons. At Saladan, there were lots of shops selling beach clothes, souveneirs, restaurants providing thai food, pizzas, and pastas. Saladan was far better than I thought. We inquired about 4-islands boat tour and phi phi tour from various tour agencies. Each one gave a different rate. Finally, we got a better deal from one of the agencies and we opted for a four-island tour via a longtail boat on 29th Jan. The four island tour cost 750 baht which included pickup n drop, lunch, and tour guide. We later had dinner at one of the Thai restaurants and headed back to our resort. At night, we went for a walk on the beach near to our resort. It was a beautiful moonlit night with stars shining and waves splashing on the beach.

After a good breakfast, the driver reached at sharp 8:10 am for the 4-islands tour. It was 9 am when we boarded the longtail boat. There were 15 people on the boat. But I was not impressed as the engine made much sound. After an hour we reached Koh-Chuck. It was a beautiful mountain in the middle of the sea. We were given 30 minutes to do snorkeling. But since neither of us knew swimming, we enjoyed the beauty of mountains and tranquility of sea all around. The waters were clear enough to see beautiful fishes and corals on the surface. After Koh Chuck, we went to the emerald cave which was a marvel of Nature. 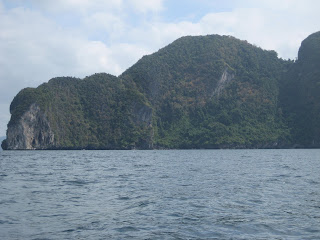 By the word of the Lord the heavens were made, And all the host of them by the breath of His mouth.

After an  hour, we had lunch at Koh Ngai beach. The beach was awesome with blue waters and white sand. We had thai chicken curry, scrambled eggs, and rice. We spent an hour and half at beach. Later we went to Koh Ma where there were beautiful corals. After spending half an hour, we left for our journey back to town. It was 4:30 pm when we reached Saladan. On arriving, we booked one day phi phi tour for the next day.  Later, we got veg. fried rice and chicken fried rice from a food court and came back to our resort. After shower and dinner, we headed to the beach for a walk.

The heavens are Yours, the earth also is Yours; The world and all its fullness, You have founded them. 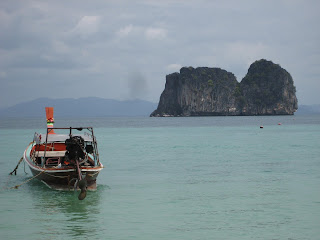 We woke up at around 6 am and after shower and breakfast, we waited for the pickup van. It was 9 am when we boarded ferry to phi phi.  It was around 10:30 am when we reached the phi phi Don. From there we boarded a longtail boat. There were around 10 people on the boat. When we reached phi phi Lay island, I was stunned by the ravishing beauty. It is a hidden gem in the middle of vast ocean.

O Lord, how manifold are Your works!
In wisdom You have made them all.

There was an enclave of mountains and a narrow opening that allowed passage of boats and ships. The waters were crystal clear with corals and colored fishes visible to the naked eye. There was an air of freshness all around. I wished to spend more time there but then the guide took us around Viking Cave and then Ao Pileh. It was also beautiful with enclave of mountains and beaches. We spend there an hour and from there we went to Ao Maya.

O Lord my God,
When I in awesome wonder
Consider all
The world Thy Hand hath made,
I see the stars,
I hear the rolling thunder,
Thy pow’r throughout
The universe displayed; 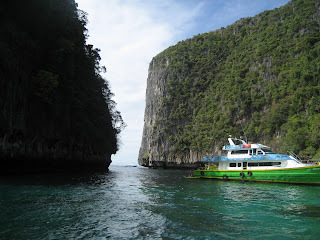 Each island was beautiful beyond description. Later we went to a beach where there were lots of monkeys. I was awed by the white sand beach. After spending half an hour, we boarded the ferry for lunch. This time we had green chicken curry, rice and salad. Later we toured around phi phi town. The streets were crowded with tourists from all over the world. After spending an hour, we boarded the ferry at 2:30 pm back to Lanta. It was 4 pm when we reached saladan pier and from there they dropped us back to our resort.

After a quick bath, we went to beach for a walk when out of blue, the rain started pouring. We were completely drenched as we headed back to our resort. That night, we had dinner at the Lanta beach restaurant. We ordered pizza and thai chicken noodles.

On 31st morning, we checked out from the resort at 9 am after breakfast. We had booked our return journey via same public van that we arrived. It cost 700 baht for 2 people to return to Krabi Airport.  I expected traffic delays but surprisingly, we reached airport at 11:30 am. Our flight was only at 3:20 pm. We passed time at a coffee house in the airport and finally boarded flight back to Singapore. Praise God for the wonderful time!

A Writer, Entrepreneur and Worshiper
View all posts by Abeesh Thomas →
This entry was posted in Travel and tagged Krabi. Bookmark the permalink.